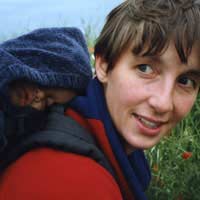 When Jess and Paul Thompson got married, they decided to keep their lives as flexible as possible. “I was a secondary school teacher and he was a surveyor, and we deliberately didn't have a high mortgage to keep things easy,” says Jess, 42, who now lives in Devon.

But after baby Imani came along, they felt that perhaps they were a bit too settled. “When Imani was about nine months old, we decided to take a career break and visit the Caribbean island of Dominica for six months,” Jess says.

“We did a quick reccie to Dominica, then four months later we packed up and left. I had already given up teaching to have Imani and Paul quit his job.

“Naively, we chose Dominica because it is the most remote and undeveloped of the islands, but when you are going out with a nine-month-old baby, in hindsight that's not a great idea.”

Too Remote for Comfort

Paul's parents are from Jamaica and he had spent part of his childhood there, but neither he nor Jess had ever spent any time in Dominica, apart from their brief reccie visit. “Apart from Scotland it's the most beautiful place in the world, but it's also quite remote,” says Jess.

“The supermarkets look quite smart, but there's nothing there. And there were rumours that they used to turn off the fridges at night – I wouldn't put it past them! We had done loads of backpacking before, but this was the first time with a baby and I really struggled to find basic food we could eat.

“Unfortunately I don't like tropical fruit and I longed for green veg, I would buy incredibly expensive frozen veg that had a picture of broccoli and cauliflower on the front, open the packet and there would just be stalks! That would make me cross.”

Jess managed to feed both herself and Imani by doing weekly visits at the local market and “trying to replicate” how she fed her in England, relying on the Annabel Karmel children's cookbook she had the foresight to bring with her. Next hurdle was to get a job.

Paul had been offered a job at a dive shop, and while he was busy diving Jess found themselves a house on the bay. “It was an idyllic place but I was on my own with Imani day in and day out, and was desperately lonely without my friends around me," Jess says.

"I had to limit time on the Internet as phone calls were so expensive, and so thought I'd find work to keep me busy."

However, finding childcare for Imani was hard. “I decided to teach and found a school with a nursery, but the first day I could hear her wailing downstairs, so I ran down and grabbed her and ran out! I never went back.”

Instead, she got a job tutoring an American boy, where she could take Imani with her. All went well - until there was a severe hurricane.

Coping with a Natural Disaster

“I woke up and heard a really weird sound, went out to the balcony and the whole of the bay was like a cauldron, it was amazing. Paul went to work as usual, and the day went on it got worse and worse,” Jess says.

“Paul phoned me and said he had saved the lives of two people on a boat trying to get on the quay. He was fine but there was no road left, and the house in front of me was gone. Then he phoned again saying he had to walk on the seabed home as the roads were gone.

“After talking to me he was convinced I was scared because I said I needed some wine. So he kept on walking, then the biggest wave came at him and he thought, that's it, I'm dead.

“But he was still alive and four hours later I saw this wobbling torchlight and it was Paul, holding up a bottle. 'You said you wanted some wine,' he said, the most romantic thing he'd ever said to me in his life!

“The day after the hurricane insects landed, two centimetres deep. At that point I had a complete sense of humour failure and we went home.”

Despite the difficulties of the trip, the family returned home full of ideas about what to do next with their lives. Jess worked in public relations for a while Paul looked after Imani, and they also took a three-month career break to Australia two years later.

“One thing Paul did a lot when I was working was take Imani swimming, and was eventually asked to train as an instructor. That's how we got the idea of setting up our own business, Water Babies, which teaches parents to teach their babies to swim. We now have 27 franchises nationwide, with our head office in Devon.

“If it hadn't been for our almost disastrous career break, we might never have set up our own company!”