Home > Case Studies > We Travelled as a Couple on a Career Break: A Case Study 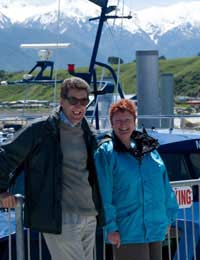 When John and Jan Lees went on a career break to New Zealand, Australia and the Cook Islands last year, their main goal was to have the chance to recharge their batteries.

“It was a real break from work and an opportunity to refresh ourselves physically and also mentally, just by being somewhere different,” says John, 50, who's a career coach based in Cheshire.

“We planned it well in advance so we could make the most of it. That's a bit complicated to do if you work for yourself, so you have to make sure you don't let people down and have some type of cover in place while you're away.”

Switching Off the Routine

John and Jan, who's a children's writer, often find it hard to switch off from work completely as they are both self-employed. So they were determined to make the most of their career break, and to get as far away from their everyday lives as possible - both literally and figuratively.

In total they were away two months – longer than they had ever travelled anywhere. “Something about New Zealand spoke to us really, and we had never been there before,” says John.

“It turned out to be a beautiful place, and we kept hearing about how wonderful the Pacific was as well, and it is. The best thing about the trip was the empty white beaches in New Zealand. I liked it better than Australia, but as we only went to Sydney there wasn't really much of a comparison to make.

“We did a lot of touring around to different places and saw some of the historical sights, did a lot of photography, that sort of thing. We also experienced a huge range of weather, everything from an Antarctic storm to pretty hot weather.”

Making Time to Do Nothing

On their break, John and Jan did many things they don't normally do at home, from whale-watching to snorkelling to visiting museums. But the best thing about the career break, says John, was having the chance to do absolutely nothing.

With this in mind, he cautions people who embark on this route, especially those who are self-employed, to stay away from working as much as possible while they're away - and to switch off the routine.

“I did some speaking engagements while I was there, which was a mixed blessing, but it was a break really,” he says. “There is a tendency to get bogged down in work no matter where you are, and in some ways it's more pressure when you work for yourself as someone is always chasing you.

“As my business is very active so there was always the temptation to want to check your emails, but it is so important not to, sometimes.” He adds that it was nice not to fill his diary with activity every day.

“The high points really were just to do with being places you have never experienced before and being around new people, it was a totally refreshing change to the people you work with.

“In fact, it is all very much about refreshment, recharging your batteries and looking at the world differently when you get back. You get a different perspective in general.”

John and Jan felt completely different when they returned to the UK, more upbeat with a renewed sense of purpose. For them, having a career break definitely meant gaining a career boost. “I felt re-energised, running courses and things again with a lot more energy,” John says.

“I had not travelled before for that length of time, only for shorter holidays. It renewed a sense of wanderlust and I would like to do it again, but not for a few years or so. We have not decided yet.

“I would just really like to do something exciting again well before we retire. Nobody knows when they are going to retire anymore. We'd all like to but nobody knows when.”

He probably learned the most from the New Zealanders, he adds. “New Zealand is an upbeat community and they are real problem solvers. It's a different feeling than you get in the UK."

He hopes that what he learned from their can-do attitude will reflect on his work back home. "They are just naturally take problems in their stride and come up with solutions.”