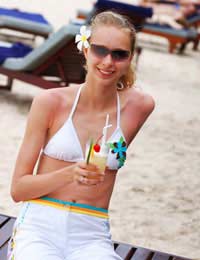 Media and communications executive Heather Carswell, 29, has always loved being able to travel to different parts of the world. So it's no surprise that when she had the opportunity to take a mini career break and visit Central America, she jumped at the chance.

“I work for Lonely Planet, which is a travel guidebook publisher, because I love travelling and have travelled a lot before,” says Heather, who is based in London but has visited many parts of the globe.

“I've been in my job for four years and love it, but I wanted to go on the road again. I didn't want to give up my work, so I thought it was worth asking them for time off.”

The answer was a resounding yes – especially when Heather offered to combine her unpaid leave with some owed holiday days and a few bank holidays, giving her slightly more than a month off. So she bought a ticket to Guatemala and packed up her backpack.

“They were quite happy to let me take holiday days which were owed to me, along with unpaid leave, so I could go and travel,” she says. “It worked out quite well for me.”

Initially Heather was planning to travel with a friend, but unfortunately her friend was only allowed to take two weeks off work in total. “I was keen to go away a bit longer, on a mini career break. I wanted it to be more than just a holiday, more than just two weeks,” Heather says.

However, she was left feeling a bit nervous about going solo. “I had a few misapprehensions about going there on my own, as I'd heard stories about people getting things stolen and a lot of people told me that the country is dangerous. I was scared about going by myself across the world, but am really glad now that I did.

“Also, I was looking forward to being in the position when I could have the time off work, and I didn't know when I'd get the opportunity to go on a mini career break again. If I had just left for two weeks with my friend, who knows when the opportunity would present itself?”

The first thing Heather did when she arrived in Guatemala was to enroll in an intensive short-term Spanish course in the Guatemalan town of Antigua. Although it only lasted two weeks of her mini career break, it gave her the basic fundamentals of the language which she needed to communicate.

“Looking back, it was really liberating to do it all alone,” she says. “You are really proud of yourself, especially when they don't speak English and you have to speak their language. It was quite a test for me, it was quite nice to go out of my comfort zone. The only time I could speak to people was in Spanish so it really was an educational experience – in a lot of ways.”

Following her time in Antigua, Heather travelled through Honduras, Nicaragua and Costa Rica before flying back to Guatemala and meeting up briefly with friends. She arrived back home via New York City, where she stopped for a few days.

Getting Away From it All

“It was definitely worth it. It really felt like I was getting away from things, although I was only away for a bit more than a month. Still, it was enough time to immerse myself and feel like I really was backpacking,” she says.

“I was able to get away from any worries I had and not think about work at all, it was fantastic. And when I started work it was great, I have really good friends there and was looking forward to seeing them all again.

“It takes a few weeks to sink in that you are back to the 9 to 5 life, but it wasn't too depressing. If I had come back in January it might have been, but I came back in mid-April so it was great.”

Heather says that being away has also helped her professionally. “I do write the odd thing for Lonely Planet, and it is always good to extend your knowledge, that can be very beneficial,” she says.

However, she adds that her mini career break was even more beneficial for her state of mind. “Sometimes you just need a break, a decent break, more than couple of weeks to get way from things.

“I think I really needed it, and I really appreciated that my employers let me have that time off as well. I would always encourage anyone to have a mini career break – or any break at all.” Just do it!

I Took a Career Break From My Stressful Job: A Case Study

Working During a Mini Career Break